Intelligent and beautiful as the Irish Setter and loving and loyal as the Golden Retriever. Hybrid vigor, in a beautiful loving companion. See our Facebook to connect with our Golden Irish 'Red Retriever' community. 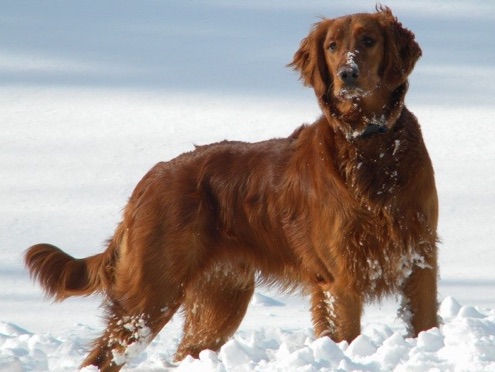 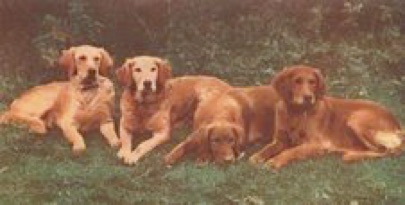 The Golden Irish is a hybrid between a Golden Retriever and an Irish Setter. Interestingly the cross is quite similar to early golden retrievers as seen in this 1930 painting. The Golden Retriever has been bred for lighter colors in recent years because this is favored by the AKC. Our Golden Irish puppies tend to be darker in color.

Growing up our family raised Pekingese. I loved our dogs and the litters of puppies that came and went. We wanted our children to have a family dog and to share the puppy experience with them and so we chose to raise Golden Retrievers. My husbands family had a Golden Retriever growing up. I always dreamed of having a Golden Retriever or Irish Setter. We got our first Golden in 2003 and named her Mandy. We had 4 wonderful children ages 7 to 17 and our lovely dog Mandy. Mandy went everywhere with us. We lived on 100 acres along the Calapooia River where the children would explore with Mandy at their side. Our 2 boys were passionate about the outdoors and loved to hunt and wanted a specific dog to train. Aaron chose a real nice field line Golden Male, he named Cody and Josiah chose a female Golden he named Ginger. Somehow the boys talked us into also getting an Irish Setter after the they had read 'Jim Kjelgaard’s Big Red'. It wasnt hard to convince me, but took a little longer to convince my husband. But convince him we did. They chose a male and of course named him 'Big Red'. The boys did an amazing job training the 3 dogs. We had the 4 dogs and plenty time and attention to offer them with the energy and passion from the 4 children.

Cody and Mandy had their first litter of puppies in 2005. The puppies were all healthy and delightful. The experience was just as I remebered as a child and I was happy that my children were able to enjoy the same experience. It was rewarding to place the puppies in wonderful homes. The pleasure and excitment the families portrayed as they picked up their puppy was addicting. The friendships we gained were rich.

Ginger, trained by Josiah, was the cleverest dog we ever had. We were planning to breed Ginger with Cody. In the summer of 2007 Ginger came into heat so we would put Ginger and Cody in seperate kennels, on a cement slab, when we went to town. We were waiting for her to be in midcycle to breed her.  I came home at dusk, one night, and let her out and she immediatly disappeard. We ran for a flashlight and found her in Big Red's Kennel. Big Red was our Irish Setter. We were devastated and felt like we had felled as breeders. However, we found that the puppies were extremely smart and farther advanced as they aged compared to our Pure Goldens as puppies. They were much calmer than most Irish Setters, and were more athletic than most Golden Retrievers. We knew these dogs would be a hit, and they have been. The first families to contact us were families specifically looking for the mix. They shared their stories of growing up with Golden Irish Mixes. Over and Over we heard how they were the best family dog they ever had. 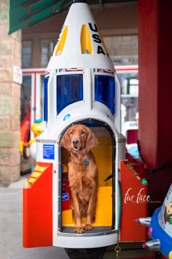 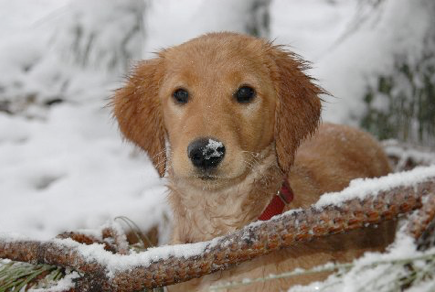 The Golden Irish was not merely something stumbled on by accident. The original accident was precipitated by a years long love of both the Golden Retriever and the Irish Setter. My first experience of the Irish Setter was reading Jim Kjelgaard’s Big Red. I was fascinated with the grace and freedom that contrasted the Irish Setter from more conventional setters in the story. Jim Kjelgaard didn’t try to pretend the Irish Setter was more obedient than the Springer Spaniel. He, rather, romanticized the hunt as a thing natural to the dog and foreign to the dogs human companion. Big Red knew what he was doing when he hunted. He didn’t need to be an extension of a long leash. Big Red was the master hunter and Danny was his mere apprentice.

Irish Setters can be strong willed. They are intensely loving and loyal but they do not have the level of automatic obedience seen in some breeds. They are majestic animals who do require some work during training to reach their potential. Unfortunately, because as the world has urbanized, the required space for an Irish Setter to shine has become rare, and this magnificent breed has seen declining popularity. Irish Setters are creatures of the open fields and the ubiquity of automobiles has ensured open fields are rare. We are fortunate to live in an area of the country still rural enough to allow the Irish Setter to run. But even we have to find time and space to give our dogs this opportunity.

We were no experts at first and have learned a lot in 20 years. The first thing we noticed when we hesitantly advertised them was that there were a lot of people who had them in the 70’s who wanted one now. Irish Setters were among the top 10 family pets in the 70’s and accidental breedings with the Golden retriever were common. It turns out the patience of the Golden Retriever tends to be inherited by the Hybrid making them more suitable for Urban environments. It also turns out that the grown dogs can be stunningly beautiful. We have improved our breeding over the years and no longer hesitantly advertise. Through our hard won experience we are able to consistently breed Golden Irishes to our own very high standards. I recommend looking at the images page to see some of the stunning photos we have collected over the years. Don’t hesitate to contact us with inquiries regarding these superb animals. 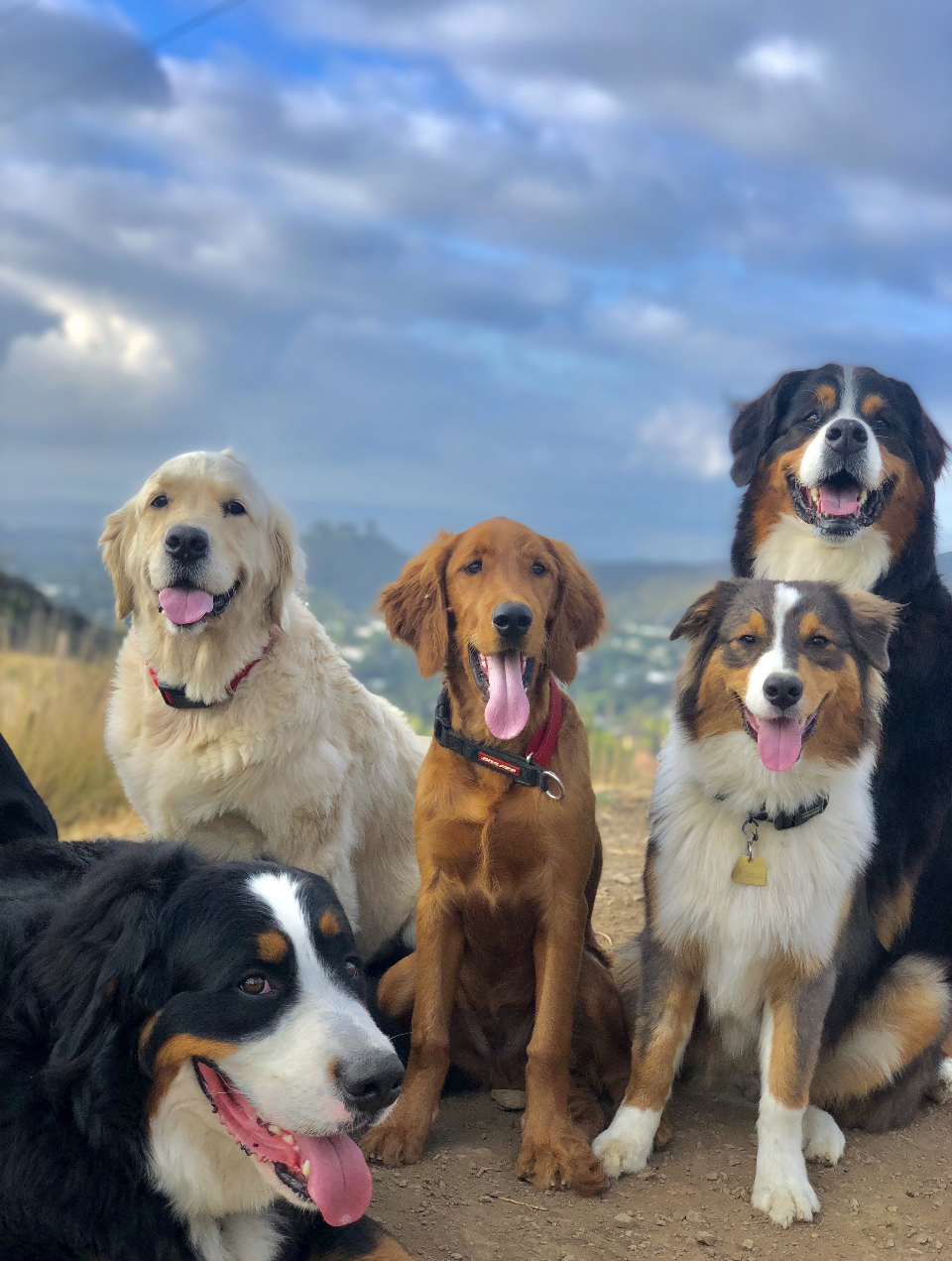 We have been raising Golden Retriever Irish Setter Hybrids for more than 15 years and have insight that only comes through experience. 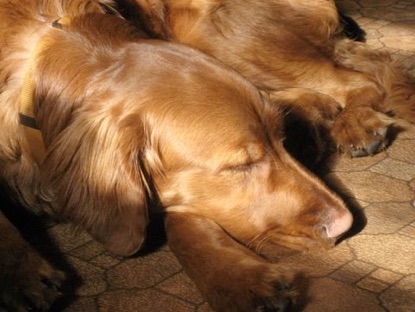 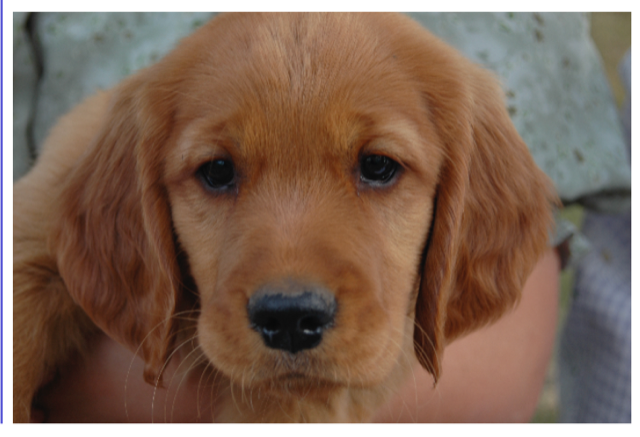 Packer (Pictured above as an adult and a puppy)

Packer is one of our favorite puppies from our first litter. He went to a family in Alaska who were kind enough keep in contact and send us pictures. Packer and his family came to visit us in 2017 on our new property. We have been on the Blue Mountains above Weston, Oregon going on 7 years.